← Heading to Mansfield
The seige at Glenrowan →

Moving on from Powers Lookout we made it into Mansfield and set up camp. The weather forecast for the coming days was not great so we decided to head off for Stringybark Creek the next day. It is not far from Mansfield and it was there in October 1878 that the Kelly gang really got into the thick of it. The gang had gone bush some time earlier to escape the attention of the police who had commenced an intensive operation to bring them to justice after the ‘murder attempt’ on Constable Fitzpatrick at the Kelly Homestead.

The campground, no neighbours!

The road into the Stringybark Creek site

They had established themselves in the Wombat ranges up behind Greta. It was a secluded spot and they had cleared 20 acres to grow ‘stuff’, particularly beet and barley to make whiskey. They also indulged in some gold mining in the creeks. How the police couldn’t find them is a mystery to us today. Anyway, the police set up a camp at Stringybark Creek about a mile away from the unbeknown secluded Kelly camp. The Gang investigated this ‘intrusion’ and confronted the police at their campsite. The result was the murder of three policemen, one escaped to report the incident. Ned was later to claim that it was self defense, the police had come to ‘get’ the gang, no survivors. The murders resulted in a public outrage and the Victorian government changed the law to declare the gang outlaws, meaning that they could be shot at sight, no questions asked!

This is the ‘spot’ where one of the police was found

The Kelly tree, not the original tree which had a bullet mark. But a later commemorative of the event! 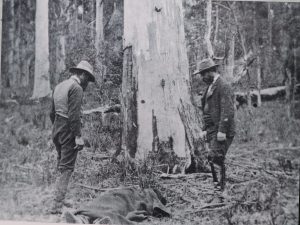 A re enactment of the discovery of one of the police a few days after the shootout.

From this time on the Gang engaged in a running battle with the police and authorities. In December of 1878 they staged  the robbery of the National Bank at Euroa, near Benalla. This was designed to try to draw sympathy for the perceived injustices of their treatment for the Stringybark murders, based around the idea it was self defence. From Euroa, the Gang moved on to the robbery at Jerilderie, where we started our journey a few weeks back.

At the site at Stringybark Creek, where the shootout is generally considered to have taken place is a memorial area to the policemen. There is some conjecture whether this is the actual site and we encountered a group from Beechworth (the volunteers at the various sites there) on a bus tour with a guide who said the site was actually further up the creek, and he had the evidence to prove it! And he was going to reveal and publish it in the next day or so. Talk about being on the spot! The site though is very tastefully done and reflective of both the Police and the Kelly Gang’s positions.

One of the policeman’s graves, the other two are very similar.

The memorial in the main street of Mansfield

Back in Mansfield we had a quick look at the cemetery to see the graves of the police and the big monument in the main street that was erected to commemorate their deaths. Mansfield is an odd sort of place. It seems to be a little soulless, everything is focussed on the snow ski industry. It is the gateway to the Mt Buller ski resort, about 45 km away. A post card of the town could not be bought anywhere, plenty of Mt Buller and the snow. Being out of season we had the camping ground almost to ourselves. Our last day was holed up in the van as the weather was  a bit inclement. Homealone enjoyed the time to catch up on some craft!

We have now headed off to Glenrowan and the siege!

← Heading to Mansfield
The seige at Glenrowan →