← Beechworth and the Kellys
Stringybark Creek and Mansfield →

We left Beechworth, but first stopped by the Beechworth Bakery to pick up some bread rolls for our next taste test along the road to Mansfield. We chose to head back towards Wangaratta and then, when almost there headed south across country to Milawa. Milawa is at the bottom of the King Valley. It’s favourite son is the Brown Bros Vineyards. No relation. Second comes the Milawa Cheese Factory where we stopped off to pick up some local product for happy hour. Some rather tasty soft bries and blues. There were also some goat cheese specialities which Allthego thought were pretty good. Homealone is not though a devotee, so we abstained on this occasion.

Moving on up the valley we were amazed at how green the countryside was, sheep up to their armpits in the grass. At the end of the valley is Whitfield a small village surrounded by grape vines. Dal Zotto sounded like a particularly interesting vineyard. Old style Italian varieties and an onsite traditional trattoria open for lunch, unfortunately not when we were passing by. Homealone suggested we could have actually stopped and stayed overnight at Whitfield if the trattoria had been open (it was early in the week). A place to come back to it seems.

Leaving Whitfield the road heads up into the High Country with views of the Australian Alps to the east. The road twists and turns ever upwards. We are passed by streams of motor bikes weaving their way through the corners. It is a favourite biker’s route over the mountains down into Mansfield and then on to Melbourne. The numerous bikes encountered were explained by it being a few days before the annual Phillip Island motor bike races.

Before reaching Mansfield we come to Power’s Lookout. This is a short diversion from the main road out to a point that overlooks the King Valley. Clear views up and down the valley. It was here that the bushranger Harry Power holed up in caves and could observe movements up and down the valley, particularly police out searching for him. He had been transported from England in 1840 for stealing a bridle and saddle. Harry was a ‘gentlemen’ bushranger who never harmed his victims, just relieved them of valuables and normally their horses so that he could not be pursued. 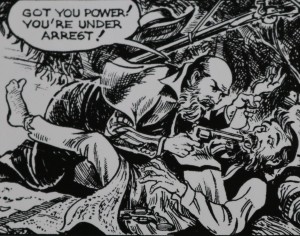 Harry spent 30 years of his life in various prisons. He fits into our Kelly story though because young Ned at the age of about 15 was ‘apprenticed’ to Harry, who taught him the tricks of the trade, minding the horses during the robberies. Ned assisted Harry in a number of his robberies. Harry was eventually captured by the police in a hideout not far from the lookout. Harry thought that Ned had ‘dobbed’ on him, but he hadn’t. It was one of Ned’s uncles. He was released from prison in 1885 and died in 1891 at the age of 72, seemingly from drowning in the Murray River while fishing. 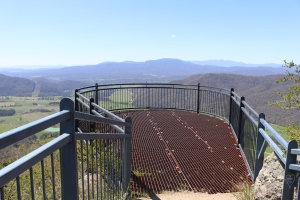 Allthego wandered out to the lookout, a slightly involved climb up and down some steel ladders to reach the KIng Valley overlook. Spectacular views. Homealone prepared that bread roll lunch! 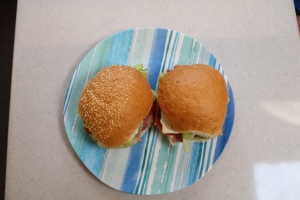 After devouring the rolls, which were quite firm and tasty (ham always helps) we headed back to the main road and on into Mansfield. It is getting quite difficult to distinguish each new lot of rolls from ones we have had before, but we will continue the effort.

← Beechworth and the Kellys
Stringybark Creek and Mansfield →