The seige at Glenrowan

We have been to Glenrowan before and have had a short wander around the siege sites. Previously we have been more interested in Bailey’s Vineyards! This time we have done the siege sites in a little more detail and taken a bit longer. Glenrowan is a short diversion off the Hume Highway and there is a great little camping ground to enjoy. So we have spent three nights here. Most people only seem to spend one! They head off the next morning. Maybe we drove them off! On the way down from Mansfield we enjoyed some buns from the local Mansfield Artisan bakery. Not bad but on the small side, we had some nice ham and salad on them. We are tempted to think that the Glenrowan rolls have been the best so far, closely followed by Inglewood and Homealone’s brother Stuart’s effort! 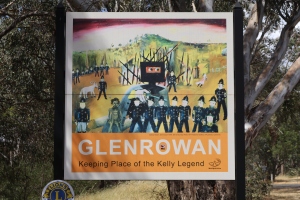 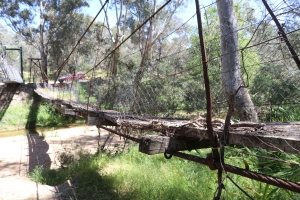 An old swing bridge at Eldorado 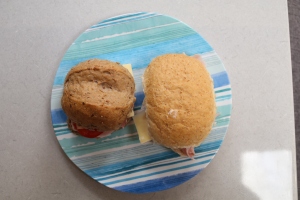 Mansfield buns, artisan types, but they were small! Rather tasty.

Anyway the interesting thing about Glenrowan and the surrounding Kelly sites at Greta and in the Woolshed Valley is that there is little if anything left of the actual buildings and locations. They have all been swallowed up in the passing parade! So one can wander around the siege site, guided by the information boards and actually have to imagine what it looked and felt like 140 years ago.

We had a more or less full day driving up the Woolshed Valley from Eldorado to Beechworth. We had previously seen the Woolshed Falls, which are at the top of the Valley, when we stayed at Beechworth earlier in the journey. The Woolshed Valley broadly follows the course of Reid’s Creek, cant really remember but it is something like a 40 km drive along a gravel road. In this area something like 6-7,000 people lived during the mid 1800s, searching for gold. It was one of the richest alluvial gold fields in Victoria. Today, people still pan for gold in the creek bed and don’t waste their time! 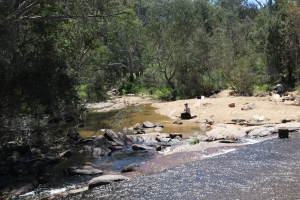 Panning for gold in Reid’s creek in the Woolshed Valley 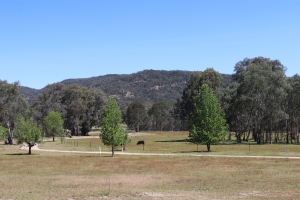 The site of long gone Sebastapol, several thousand people lived in this area. Steve Hart and Aaron Sherritt lived in these parts. The Kelly Caves and lookout are in the hills in the background. 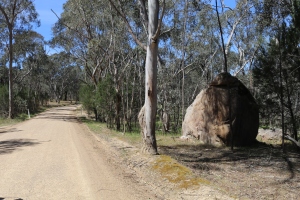 Road through the Woolshed Valley

Maybe, Allthego will come back here and try it. Homealone is not greatly interested in this idea! The physical evidence of all this human activity has gone, swallowed up by the regenerating bush and more recent human endeavours on the land. It is in the Woolshed Valley that the other non Kelly members of the Gang, Joe Byrne and Steve Hart, grew up. It is also where Joe Byrne shot a life long friend Aaron Sherritt who had turned into a protected police informant. Where he was shot in the Woolshed Valley is not far from Beechworth. 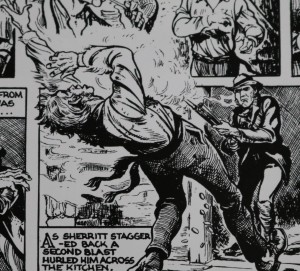 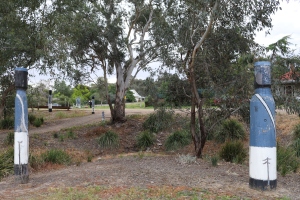 Police positions across a creek, hotel site is in the middle background. 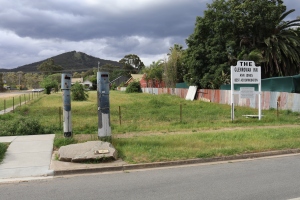 Site of the hotel in which the Gang holed up and held hostages.

The shooting of Sherritt was the genesis of the Glenrowan siege. He was shot by Byrne and Ned’s brother Dan to create an event that was designed to enrage the authorities and cause them to send a train load of police and aboriginal police trackers from Melbourne to Beechworth to chase down the Gang. Beechworth is north of Glenrowan and Ned pulled up a section of the rail track north of the Glenrowan station to derail the train and cause numerous casualties. Ned had a dream of then demanding a separate state in NE Victoria for the oppressed population. 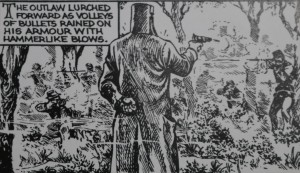 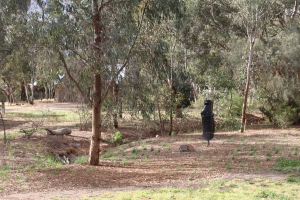 Site where Ned was captured 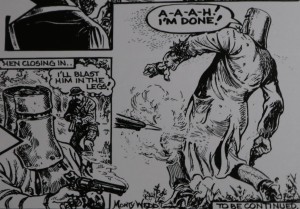 The plan didn’t work for all sorts of reasons. My readers can pursue the detail elsewhere if they like! What did happen though was that the train was flagged down before reaching Glenrowan, the police alerted to the plot and the hotel where Ned and the boys, together with lots of hostages where holed up, was laid siege. The shootout went on all night. In the end Joe Byrne, Steve Hart and Dan Kelly were killed. Ned survived and, as we have already heard, was ultimately taken to Old Melbourne Gaol tried, sentenced and hung on 11 November 1880. 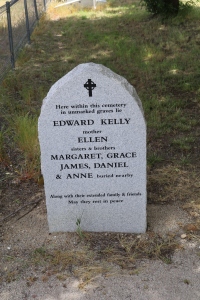 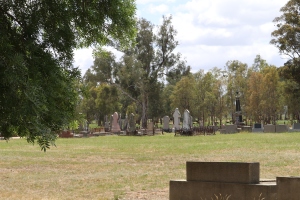 To finish off our Kelly journey we took the short drive out to Greta to the cemetery where various members of the wider Kelly family, including his mother Ellen, Dan and some sisters are buried in unmarked graves. Steve Hart is also buried in an unmarked grave. Ned was reburied here, also in an unmarked grave, in 2013 after having been exhumed from his grave in the Old Melbourne Gaol. HIs mother Ellen died in 1923 at the age of 93, a long hard life. Needless to say you can’t find them! Unless you have inside knowledge! There is a memorial headstone at the cemetery entrance acknowledging their presence.

Back at Glenrowan we prepared for some time at Baileys for lunch and for the start of the trip back to Brisbane the next day.