← Such is Life
Jerilderie and the end is nigh →

On the Road Again

‘On the road again

Goin places that I’ve never been

Seein’ things that I may never see again

And I can’t wait to get on the road again’

With the words of Willie Nelson echoing from a day ago we are now charging down the highway headed for Jerilderie, just this side of the NSW/ Victorian border. It is going to take 3 nights, so we are just rolling along and not charging! Great song anyway!

After departing Inglewood we first stropped at the bakery on the way out of town for some bread rolls. Allthego likes bread rolls. But, they are of varying quality. So, on this trip he is going to focus on ‘what has been the best bread roll so far’! Rather than the best sausage or meat pie. 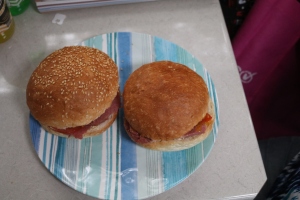 Also,  Allthego and Homealone have become students of silo and water tank art. It seems rural Australia has in recent years exploded in creativity and expressionism and art is flourishing on these great old structures from our agricultural past, albeit some are still in use by our grain growers. Yelarbon, midway between Inglewood and Goondiwindi, has recently added to the collection. There are a number of silos, side by side, along the highway into the town that have been adorned with artwork depicting the wetlands near the town. A young boy sits in the water floating off paper boats made from old newspapers found in the town gaol. It is supposed to represent today’s youth remembering the lessons of the past, but using their energy and creativity to drive the future. The painting is half finished and will be extended across the other silos when funding is achieved. A little further along the road at Goondiwindi is a water tank that has been painted with some local river scenes. Goondiwindi in indigenous thinking means ‘resting place of birds’. Brolgas and emus feature in the work as significant birds in aboriginal life. 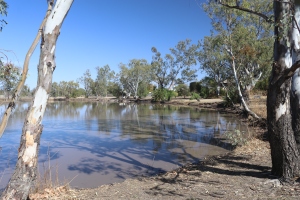 Leaving art behind we are now head in earnest down the Newell Highway. After a night stopover in Coonabarabran we aim for Forbes.  Going through Dubbo we stopped for lunch and picked up some buns. Like the Inglewood buns we have some corn beef and salad. But you know they were not quite there. A bit flat and airy. The Inglewood ones had a little crunch and then the bread was munched on. Inglewood buns so far!

We made it into Forbes. Despite a dust storm blowing in from the west. It is very dry out in these parts. Rain is needed. We stopped over in a free camp just out of town beside the river. There were a few vans here and it is was quite civilised. Marie, wife of Stuart, a Homealone sibling, was on tour in Forbes visiting her family. Stuart was off in Orange trying to play in a long weekend golf  tournament. We do not know his progress. She called by our  camp site to  say hello. Earlier in the day her dad had welcomed Allthego and Homealone to Forbes on the local FM radio station, where he is a volunteer announcer. He had played a Neil Diamond song maybe “Sweet Caroline” a Homealone standard, not “On the Road Again” or “It’s great to be back home again” (another Homealone standard). 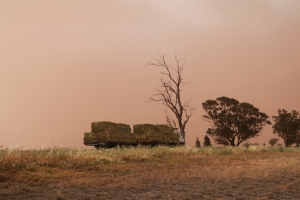 Hay bales on the way north near Forbes. 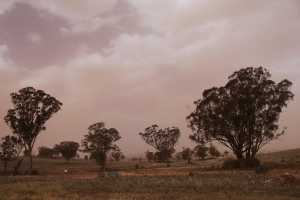 It was NRL Grand Final night and Allthego decided to listen in on the radio. It would have been nice for Canberra to win! But they didn’t. But you know, there is always someone who takes umbrage at you having the radio on at 10 pm with commentators reliving why Canberra lost. So a gentlemen from a van across the way suggested we should TURN IT OFF. Probably a sore loser, but he was very polite. Maybe AFL. So we turned it down, amidst the turmoil of our hot water system blowing a tube and shedding water everywhere. With the hot water sort of fixed it was off the next morning to Jerilderie.

Going through Narrandera it was another painted water tower up on the hill overlooking the town. These works of art had not been long finished and they were quite remarkable.  Overlooking the town, great statements of presence.

The other side of the tank.

Further along we diverted off the Newell Highway into the town of Lockhart. This little town has a simply wonderfully painted water tower, smack bang in the middle of town.  A lot of other street art and eateries. Great spot for a Hayes family Christmas get together!

We are now in Jerilderie. Ned Kelly awaits.

← Such is Life
Jerilderie and the end is nigh →