On the way back

After leaving Tammie Norrie in the morning we spent our last day on the Shetlands wandering around Lerwick. Our ferry south to Aberdeen left at 5.30 pm so we had a few hours to fill in on the streets. Lerwick is a relatively old place and dates back to the late 1100s. It has always been an old sea port and fishing centre. 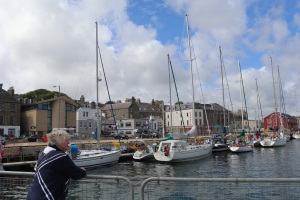 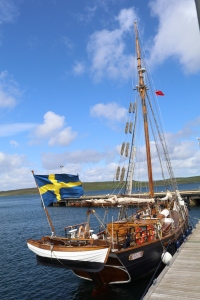 Replica of an 1860s Danish cutter

The town is built back from its harbour with rows of 1800s early 1900s double storey buildings separated by narrow streets and lane ways. It is really a bit of a rabbit warren. It all looks a bit Dicksonian. Once you get to the top of the hill and overlook the Bay things spread out and the town modernises. 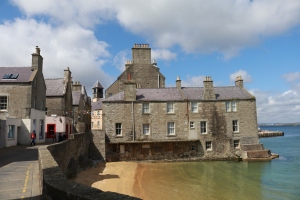 Overlooking the Bay is Fort Charlotte. Rows of cannons have been staring across the Bay here for 350 years. The enemy? Those old foes the Dutch and the French. Apparently, the Dutch were very keen on Lerwick as a base for their fishing expeditions into the North Sea and their vessels were frequent visitors to the port during the 1700/1800s. The Town Hall has some amazing stained glass windows, which record much of Shetland’s Scandinavian era and maritime history. There is an imposing window of the Grand Master Mason of Scotland, the Earl of Morton. He owned Shetland in 1761. The window was a gift of the local Masons in the 1880s. 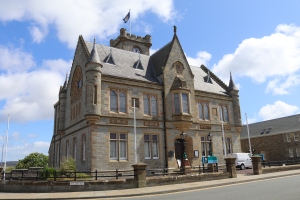 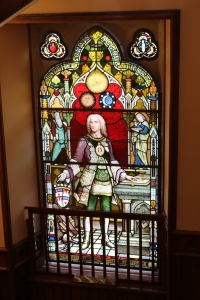 We boarded our ferry at the appointed hour and set off in a bit of gloomy weather for Aberdeen on the east coast of Scotland. Along the way the ferry stops in at Kirkwell on Orkney at 11pm to do a pick up/set down of passengers before resuming the overnight journey to Aberdeen, where we arrive at 7am. After breakfast on board we head off for Inverness to return the car and catch a plane to Glasgow. It was quite a pleasant drive through the Scottish Highlands and along the malt whisky touring route past numerous distilleries. Stopped in for a look over the hedges and walls at Cawdor Castle. The Castle is well visited because of it’s loose association with Shakespeare’s play Macbeth. Trouble is, whilst Macbeth did become the Thane of Cawdor in the play (he didn’t in real life), this castle wasn’t built until the 15th century and King Macbeth was around in the 1100s. Shakespeare took more than a few liberties with history. 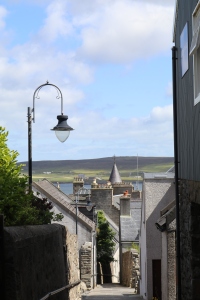 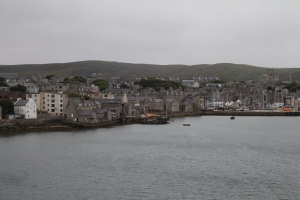 Back on the road we arrived at Inverness Airport in plenty of time to drop the car off, Allthego to leave his wallet in the car, lock the car, then drop the keys in the locked key return box at the departure terminal. Homealone had not alerted Allthego to the fact that he hadn’t taken his wallet with him when getting out of the car. Allthego didn’t push this point at all but the wayward wallet was somewhat important and all efforts were now directed at getting it back. Two phone calls and ten minutes or so later the guy who was already coming to pick the car up arrived and said wallet was retrieved. A bit of luck here timing wise. But all is well that ends well.

It was a good flight down to Glasgow, via a stop over on Isle of Lewis & Harris. At Glasgow the saying that ‘things happen in threes’ played out quite nicely. Back tracking a little, Homealone had left our passports and some rings in a hotel safety box in London and Allthego had to go back and retrieve them some time later, fortunately they were still there. So counting the wallet affair that is two. Number three was Allthego’s lap top. It seems the hostie on board the plane didn’t alert Allthego that he had left the lap top in the luggage holes above the seats when he left the plane at Glasgow. This oversight was discovered whilst waiting for the luggage. Allthego tried to wander back onto the plane to retrieve the laptop, but security people thought this was not the way to do it and directed him to a service desk. Homealone was left on the other side of security to await the bags. The service desk was very helpful, somewhat amused though, and understanding. Seemed to take forever though for the lap top to return with a very helpful staffer, Allthego had been getting increasingly concerned that the plane would turn around and go some where else.

Anyway, the lesson from all this is for Homealone in the future to have a checklist.

Waiting for the taxi

Before moving on to the United States and continuing the journey home we recuperated for a  couple of nights in the Glasgow Central Reni McIntosh Hotel, located in a building dating from the 1600s. No lifts and we were on the 4th floor up about 8 flights of steps, with sloping floors and low doorways. A slight trial for the knees and muscles. Small room but reasonably comfortable.

We are now in Houston staying with our son Mitchell and grand daughter Piper for a few days.