← Orkneys
On the way back →

We were greeted on our arrival in Lerwick, the major town on the Islands, by fog. We haven’t had fog yet and the forecast said we were to have fog all day. It was a short drive to our self catering unit just out of town, opposite the brewery. Very comfortable lodgings with some nice lounge chairs to relax back in. It has been some weeks since we have had a lounge to lounge in! We are staying in a unit called ‘Tammie Norrie’ which is some sort of local lingo for ‘Puffin’, appropriate we thought. All the other units are similarly named after sea birds.

Everyone is welcome in Lerwick 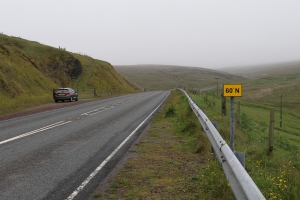 Our host suggested that we should go south first as his read on the weather was that the fog was going to clear from the south. So after settling in we set off. He was partially right and we did get some views of the countryside along the way. The rolling green hills were similar to those of Orkney, so were all the sheep! What was somewhat different though were the farmhouses and small villages, places tended to be of more ‘modern’ construction. There was less renovation of old structures. Along the way we past by the 60 dg north sign, the equivalent latitude in the south would put us a long way south of Tasmania. 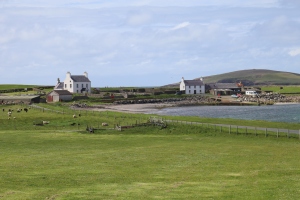 We followed a similar pattern as we did on the Orkneys, wanting to see the west and north coast as well as the south. The west of the main island is supposed to have a slightly different climate than the rest. It can be sunny there when it rains elsewhere. So we tried it the next day and it did clear somewhat for us to see the west coast beaches. No swimming. Along the way we passed by a small village called Sound, this was were John Clunies Ross was born. Ross was responsible for colonising the Cocos & Keeling Islands in the Indian Ocean, his family ran the islands up until 1978 when Australia took them over. There always seems to be able to found some link to Australia in these parts of the world.

Eshaness cliffs, near the lighthouse

We woke to bright sun on our next day and took off for the north, many rolling hills and sheep. There are a lot more black sheep here compared to the other places we have been. Quite a lot of Shetland ponies out in the paddocks and beside the road, very friendly little fellows.  In the north is an ancient volcanic landscape and the cliffs along the Eshaness coastline were very impressive. Allthego and Homealone are starting to get a little weary on the road as the afternoons drag on into the late twilight and so we headed back to Tammie Norrie to put our feet up and enjoy some home cooked food. Evidence of the ancient past here in the Shetlands appears to be able to be found in numerous places, like on the Orkneys. But we have preferred to pass by this and just enjoy the countryside.

← Orkneys
On the way back →