← I’m Back!
Caledonian Canal (another part) →

It has been one of Allthego’s bucket list items to do a boat trip on the Caledonian Canal. What better reason to come to Scotland. The Canal connects the Scottish west coast at Fort William in the south to the east coast at Inverness in the north. It is 97 km long. Built in the early 19 century, it took about 20 years to construct and was completed in 1822. The man made portions of the Canal link a series of natural lochs (or what we would call ‘lakes’) together, in what is known as the Great Glen. The most famous of the lochs is Loch Ness. There is roughly 30 km of man made canals and around 65 km of natural lochs. Loch Ness is inhabited by Nessie, which we hope to sight in due course. There are a few (12) large locks to navigate through as we move along the canal,  we are not allowed to go down the staircase locks into the sea at either end.

The canal was built to provide a trade route between the east and west coasts that would bypass the dangerous sea route along the Scottish west coast and around the top near the Orkney Islands. The Canal construction was also to provide a source of employment in the Highlands and protection to shipping from the ravages of French privateers. The threat of Napoleon also influenced the English Navy to support the project. When the Canal was completed though, Napoleon had already been defeated and the Navy didn’t need to use it. Ship building had also advanced and the new steam driven iron hulled ships were too big to use it. Today, it is a recreational canal for folks like us and also a safe route for sailing enthusiasts moving from places like Norway in the North Sea down to the northern Atlantic and Irish coasts. 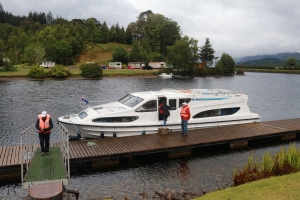 Our Le Boat cruiser tied up at Glenorchie 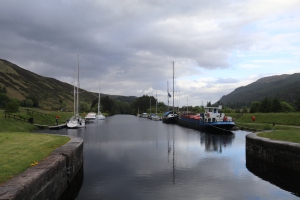 Laggan Locks and the Canal north 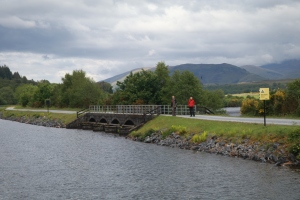 To undertake our journey we have hired a modest motor cruiser that will reasonably accommodate the 6 of us in 3 berths, with a spare one to hold luggage. All up we are onboard for 10 nights and had 8 days on the water. The plan was to cruise the length of the canal. The journey started at Laggan about a third the way up the canal, so the first cruising day took us back down the Canal through Loch Lochy to Fort William where we promptly turned round and set course for Inverness, setting course wasn’t that difficult as you just pointed the bow straight ahead most of the time. Overnight, we moored alongside pontoons or in small harbours. Generally, we were able to hook up to water and power. 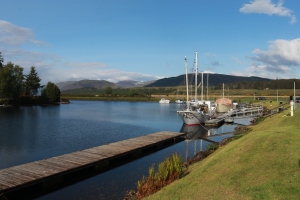 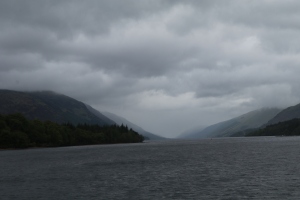 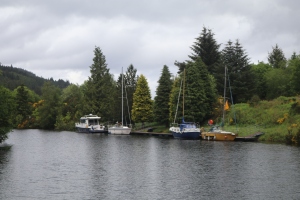 We set off in pretty terrible weather; cold, windy and scattered rain squalls. It was like this for the first 3 or 4 days. However, into the afternoons, the weather cleared a little and we were blessed with some patchy sunshine. 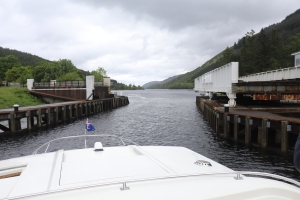 Going through a swing brdge 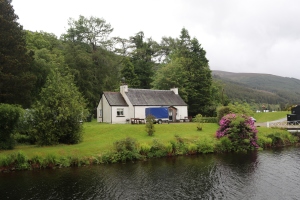 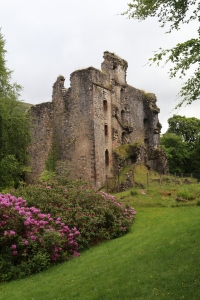 There was considerable merriment onboard despite these conditions. Good humour abounded and what happens on a cruise stays on a cruise. So the saying goes. Niel’s efforts with the fishing line were rewarded with 2 eels, they were returned to the water to live another day. On our third night we found ourselves moored near the ruins of Invergarry Castle. Nearby was the Glengarry Hotel overlooking Loch Oich, a small loch between Loch Ness and Loch Lochy. We had lunch in the Hotel, a wonderful old building with great eating areas and views over the Loch. Invergarry Hotel, another short Scottish walk away, beckoned for dinner. Great old pub setting, food excellent! 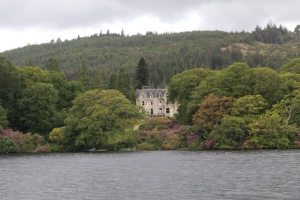 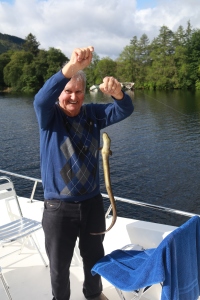 Niel and his eel! 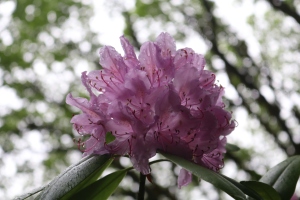 Rhododendron flower. These were in bloom in many places.

The landscape along the Canal is outstanding. In the early stages we have views of Ben Nevis (Scotland’s highest peak), still with small patches of snow on its northern face. As we progress the mountains continue to line both banks, covered in plantation pine trees and naural vegetation. In the foothills and along the flats beside the Lochs there are small farming operations and plenty of black faced sheep in the lush green paddocks. The weather drapes the mountain ridges and valleys in layers of cloud and mist, sometimes an eerie atmosphere prevails. Great contrast with the clear blue sunny skies of the publicity brochures, postcards, calendars etc. We all think it would be good to see some of those too!

Perphaps the new day will bring some on.

← I’m Back!
Caledonian Canal (another part) →