Been away for a few days, but we are now back in Fort William. The six of us have completed the boat trip up and back down the Caledonian Canal. The Nielsens left us in Inverness and headed off to Ireland and the Watts are on their way back to Australia. The internet along the canal was not conducive to blogging so Allthego now has a few updates to complete and will try to get back to real time over the next few days. More on the canal experience in the next post. 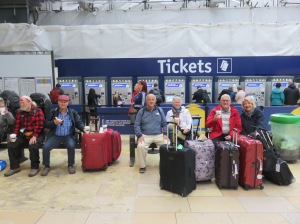 From the right the Watts, then Browns and Niel Nielsen in red cap at left, Glasgow Queen St Station. Setting off for Fort William, 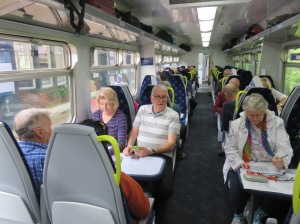 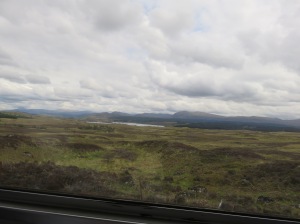 We arrived in Fort William from Glasgow by train along what is known as the West Highland Line. This is a rather spectacular train journey through the Scottish landscape. Leaving Glasgow we travelled along beside the Clyde River, before rising into the Highlands. Up here we ran high above the shores of lochs far below, through what is almost rain forest. Past a nuclear submarine base and later the storage caves of their trident missiles. Later we crossed Ranoch Moor, in some places the train line runs on rails ‘floating’ on foundations made from wood and ash. It’s pretty damp and boggy on the moors! We go along at a fair pace and it is hard to capture images of the scenery through the windows and ‘Scottish mist’, code for rain and fog. 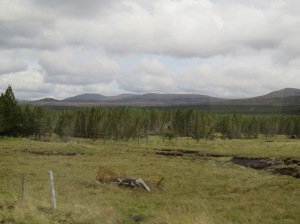 Across the moors from the train. 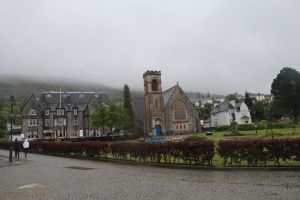 It was a damp day in Fort William, Scottish mist. 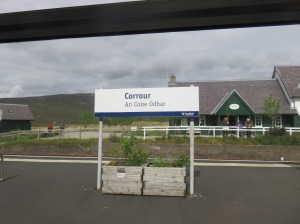 This is the most remote Scottish railway station

Along the way we all indulged in some light snacks and enjoyed impromptu entertainment. Tony Watt it transpires is somewhat skilled at splitting apples. But not ones that are a bit on the floury side. He needs crisp ones. Anyway he managed to lay a finger across an apple and then smash down with his other hand upon said finger. Made a bang! Instead of splitting in two the apple shattered. Homealone across the aisle took a sharp catch of a piece, a lady in a seat behind had a piece whistle past her and the rest just sought of flopped on the table. Fairly humorous at the time! 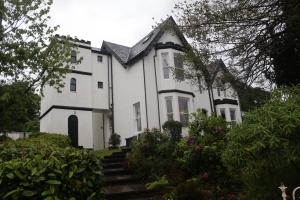 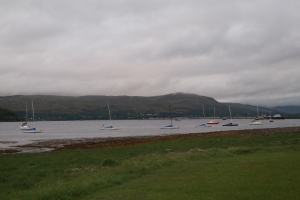 Eventually we arrived in Fort William. It was dry and we set off for our accommodation pushing and pulling our bags down the short stroll to Ashburn House, overlooking Loch Linnhe. It was a lengthy ‘short’ stroll and we eventually collapsed into the B & B. Great B & B with an excellent breakfast set up overlooking the Loch. We had a very comfortable three nights here. Bit wet and damp though which was disappointing. The previous summer in Scotland had been unusually dry and April this year had followed the same pattern. But May, well May seems to be doing the catching up. 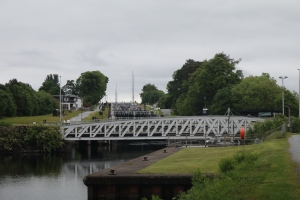 Neptunes Staircase takes boats from the sea waters of Loch Linnhe up 8 locks into the Caledonian Canal. The white structure is a railway swing bridge and behind it is a road swing bridge, All need to open to let boats up into the canal. 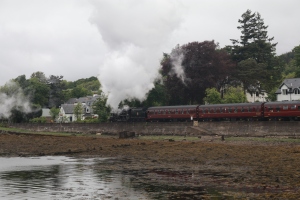 Jacobite steam train heading for Mallaig along the shores of Loch Linnhe.

We spent our first day in Fort William having a look around town, and then walking along the first stretch of the Caledonian Canal from the sea locks on Loch Linnhe up to Neptune’s Staircase. Rather cold, windy and damp at times. Enjoyed hot chocolates at the café beside the canal. 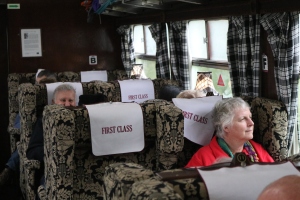 First class in the Jacobite heading to Mallaig. 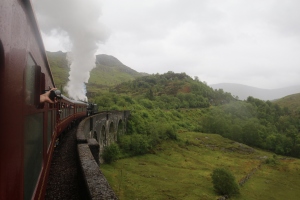 Crossing the Viaduct at Glenfinnan, made famous in the Harry Potter movies, 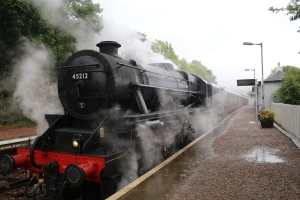 Ready to roll at Glenfinnan station

The highlight in Fort William was the 84 mile round trip steam train journey on The Jacobite to Mallaig and back. It was misty, wet and cold but the journey was memorable. Particularly, the crossing of the 1898 Glenfinnan viaduct. 21 Arches overlooking Loch Shiel and made ‘famous’ in the Harry Potter movies. After an early pub dinner in Mallaig, the train stops there for an hour and half before returning to Fort William, we arrived back at Ashburn House to prepare for our taxi ride the next day to Laggan and the start of the cruise on the Caledonian Canal.