Yes, we are off to Stratford for some Shakespeare, ‘Taming of the Shrew’. The twist on this interpretation of the play is that the gender roles are being reversed. The play traditionally has a male taming a female shrew, but this time it is the other way around. All the parts in the play are acted in reverse gender.

We trained it from London to Stratford, first on the tube to Marylbone Station and then a regional train to Stratford. A pleasant journey first through the outskirts of London and then the rolling  countryside to Stratford. Took a bit over an hour. A short walk to our accommodation in the Mecure Shakespeare Hotel. Parts of this hotel date back to 1637, we seem to have one of these rooms! The floor slopes, nothing is particularly even, doorway a bit low, window and door frames a bit twisted etc. Great atmosphere though and everything works ok. The Watts similarly placed next door to us. 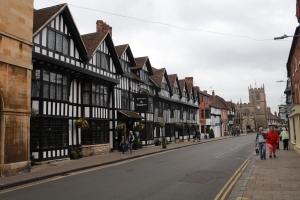 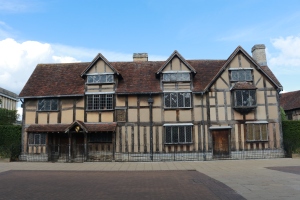 There were some markets on, a few owls on show. A white faced scops owl.

It was to be a busy night as we were off to the play the night of our arrival. We had some good seats in the stalls not far back from the stage. It is what is called a thrust stage, it juts out into the audience who are seated around it and also in boxes set up into the walls. Just under a thousand in the  theatre and no one is more than about 20 metres from the action. Very entertaining night, wonderful costumes. You could see all the facial interplays between the actors and also catch  the impromptu lines. One of the actors tapped some piano keys and offered  “Someone should compose that”; got a bit of a titter from the audience. Anyway, Allthego didn’t learn any new tricks on how to tame a shrew. He doesn’t need any tricks anyway because he doesn’t know any shrews! Can’t speak for Homealone!

Next day we had a wander around Stratford and enjoyed an English Sunday pub roast lunch at a local establishment, we had missed breakfast which was to be a help. Roast beef and pork with Yorkshire pudding, potatoes, peas etc. Big meal.

Tony Watt in red top peering into our luncheon venue

Where did it go?

It was then back on the trains to Glasgow. This was a staging point for us before moving further north to Fort William and our boat trip on the Caledonian Canal. We would also meet up here with the Nielsens, increasing the travelling party to six. It took most of the day to reach Glasgow Central Railway Station. Just had to more or less walk to the end of the platform to get to our hotel. Great location! We had experienced some random seating issues on the train and had to swap seats a couple of times to accommodate people along the way who had reserved seats. Whilst we are reserved people we had unreserved seating, wont make that mistake again. Book well in advance! And there is never enough room on these trains for people from the colonies with a modest amount of luggage. But at the end of the day it was all ok and you just had to work around the issue.

The next  morning was rather wet. Fortunately, as the day wore on the skies cleared somewhat and we got some blue sky and sun for our wander around the old city sights. Neat dinner that night at the Riverside Casino over looking the Clyde River. 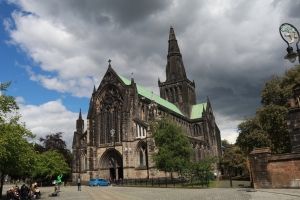 It will now be off again in the morning on the train to Fort William, we have reserved seats. The train journey takes us along the iconic West Highland Railway through some scenic landscapes and along the shores of Loch Lomond. Still have not seen an Archie mug! Whilst on the boat the internet may be unreliable and your humble correspondent may well be off the air for a few days.