← Looking for Archie
Stratford-Upon-Avon to Glasgow →

The Chelsea Flower Shower is an iconic London event. In planning the trip to London we had timed it so that we could include the show in our schedule. To ensure tickets they had been booked before last Christmas. The Watts had arrived from Australia as planned and we set off together for the great event, having moved lodgings to Belgravia Hotel a couple of kilometres away from Nell Gwynn House. 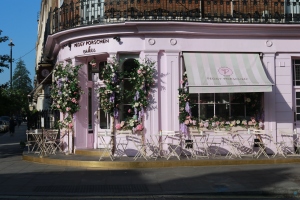 Tea rooms near our lodgings in Belgravia 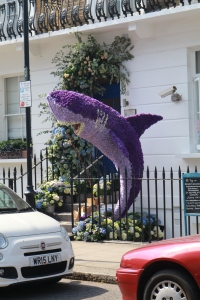 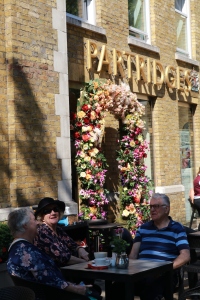 On the way we stopped for breakfast at Partridges, grocers to the Queen (she probably has a few grocers). It had also been decided to get some fresh bread, cheese and ham to take along for lunch. It was an impressive grocer, more like a big deli with plenty of fresh meats, cheeses, breads, biscuits etc. Various Royal souvenirs, BUT NO ARCHIE MUGS!  Nice breakfast and location along the street that led to the show. Many of the shops decked out with floral exhibits in doorways and windows. One of the terrace houses along the way had a shark in its front ‘yard’. Thinking back this was probably a warning to passers-by of the ‘sharks’ at the flower show. Food and beverage prices were elevated to say the least, of which we had forewarning. 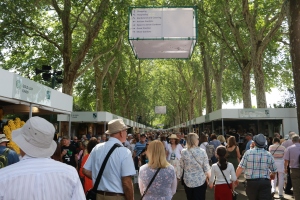 Main Street at the Show 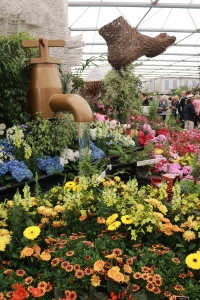 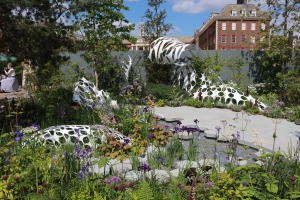 Despite opening the gates at 8am there were still streams of people queuing  when we arrived around 10am, thinned out a little as we moved past the first displays. It is hard to describe the seemingly never ending and impressive mini gardens, flower arrangements and marketing stands of all the hangers on in the gardening industry. Dwarfs the annual Floriade in Canberra. 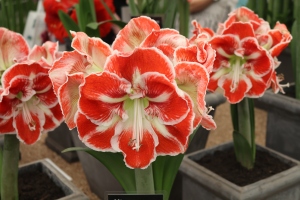 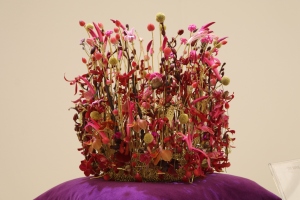 In honour of Queen Victoria’s 200th birthday there was flower crown competition. This was one of the entrants. 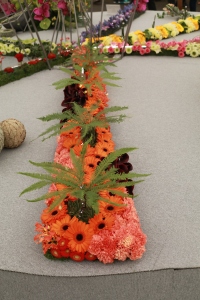 The only exhibit having a queue was that of Princess Catherine (Kate as she goes by), it was called ‘Back to Nature’. It was a 40 minute wait in the queue we were told. Too long. We went back a couple of hours later and it was longer. The installation had been well publicised in the papers and TV. Promoting kids getting back outside into the fields, tree houses etc. Prince Phillip wasn’t around but one could imagine him getting in the act, being ‘confused’ and making an aside or two about the name ‘Back to Nature”! 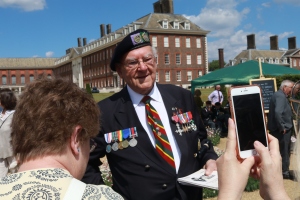 D-Day veteran having a chat 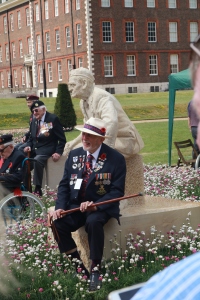 A veteran, impressive sculpture behind him 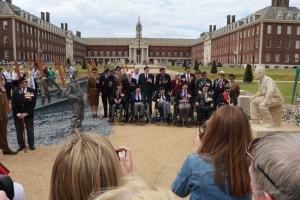 The Show is held in the grounds of the Royal Hospital Chelsea. As I have since discovered it is not a ‘hospital’ in today’s sense of the word. Rather it is a retirement and nursing home for veterans of the British Army and is run as an independent charity. It was founded in 1682 and parts of the buildings date to 1609. Residents are called ‘pensioners’. 2019 is the 75th anniversary of the D-Day landings in Normandy and on the day of our visit a special ceremony was held to mark the occasion and open a commemorative installation at the Show. There were a number of D-Day veterans on hand, well into their 90s and some quite fit and talkative about those days. It is planned to move the installation to the Normandy beaches in France later in the year. 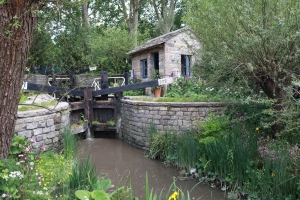 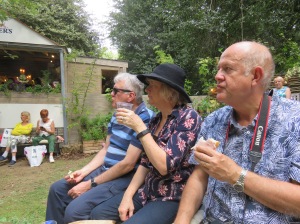 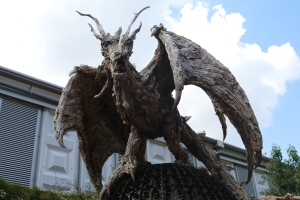 Inspired by ‘Game of Thrones’ perhaps

Over our lunch of ham and cheese we enjoyed a glass of gin spritzer. We each had a different flavour; rhubarb, strawberry, elderberry and honey. Also met the owner who championed the merits of his gins over all others. His were made from real fruits and his own honey, not essences like the other competitors! And later in the day a refreshing glass of the Shows traditional Pimms and lemonade as we rested our feet before heading off back to the hotel.

An eye opening day to the world of flowers and design.

We now head to Stratford-Upon-Avon for some Shakespeare.

← Looking for Archie
Stratford-Upon-Avon to Glasgow →