The ferry left Stornoway mid afternoon and we arrived back at Ullapool around 6.30pm for the drive north to Stoer, which is only about 35 miles north of Ullapool, near a town called Lochinver. It is on part of the coastline that jutts out into the sea opposite Stornoway, over on Lewis. It for the most part a dual lane road, but after turning off to Stoer becomes a single lane track. So it was a bit slow going along this part. Some great highland scenery and clear skies for parts. 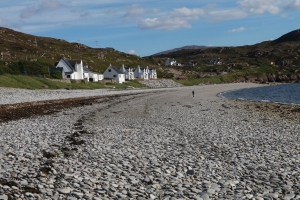 This beach north of Ullapool was entirely thin flat stones, most about size of a small plate. 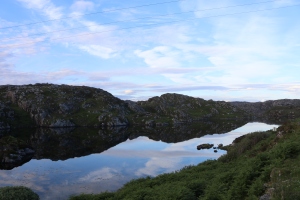 The Ardvreck Castle ruins on a small peninsular in Loch Assynt were particularly evocative of times past. Originally built in mid 1400s, modified over the years and then destroyed by a lightning strike in 1795. It was home to the Clan MacLeods of Assynt. It was the scene of much violence, with murders, executions and sieges of both traditional enemies and quarrelsome branches of the MacLeod family. Many ghosts are said to haunt Ardvreck.

The Highlands B & B at Stoer was an interesting piece of accommodation. It was formerly a ruined croft house, of which we have seen a lot. There were some photos of the place pre restoration. More or less a pile of rocks with stone wall ends. We stayed in the loft. Quite a big comfy room. There were a few other croft houses scattered around the area. It was close to a white sand beach. But there is nothing much more at Stoer, other than sheep.

The reason for staying at Stoer though was to attempt the track to the famous sea stack, the Old Man of Stoer. It is a short drive out to the Stoer Lighthouse, where the track starts. Homealone decided to remain behind. Allthego set out on the 3 km track over the moor to the Old Man. There were a few other people doing the walk, so it wasn’t lonely. It was up and down though, a particularly steep section down into a gully and then up the other side was mildly challenging for the knees. The end of the trek though was rewarding with a great view of the Old Man. Allthego turned back at this point, one could go on and look down on top of the Old Man, as time was marching on. The track out and back took the Old Man of Mt Ommaney about two and a half hours and he was a bit puffed on arrival back at the Lighthouse. 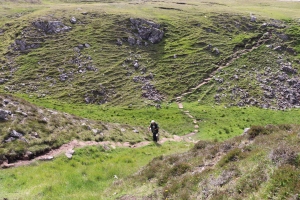 The track to the Old Man

We continued north along this coastal single track secondary road before rejoining the main drag north and around the top to Durness. Along the way we stopped for a late lunch at the village of Kylesku, perched beside a sea loch. This was a nice spot sitting out in the sun, bit of wind blowing, gazing across the loch to the mussel farm in the waters on the other side. This was the farm where the mussels Allthego had for lunch came from. Pretty fresh and tasty they were too! Home alone had some fish ‘n chips. The standard for fish ‘n chips is a big piece of battered haddock, all of the ones we have had have been excellent, with varying quantities of chips. But it is starting to get a bit repetitive diet wise. Most move on to some lamb! Of which there are plenty running around in the paddocks. We stopped in for a short break at Durness. Unfortunately, the Zipline across a beach side ravine had just taken its last passenger for the day and we couldn’t try it out. Some great views and an adrenaline rush were missed out on. 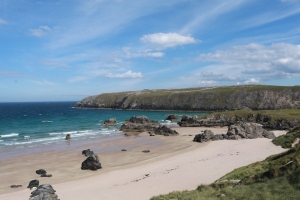 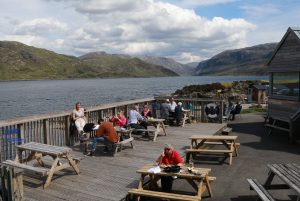 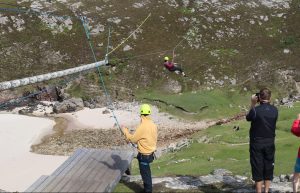 Our stop for the next couple of nights is at Armadale, a few miles east of Durness. The sun is setting around 10.30 pm so it makes for long evenings. It is also early mornings with the sun rising around 4 am. It makes for long days!