Over the sea to Skye

We are in Fort William for a day before heading a little north to the Isle of Skye. So the opportunity, having picked up our car, was taken to revisit the Glenfinnan Viaduct and Monument. The National Trust have a visitors centre in the valley below the viaduct curve and after a short walk up a hill behind the centre there is a good view of the Viaduct. Well, Allthego stood on the hill for 45 minutes to await the Jacobite train from Fort William. As did about 50 other people. Allthego stood his ground on a good vantage point despite some invasion efforts by other nationalities. All good. Anyway the locale was a little too distant for a good clear shot of the train, needed the longer lens which had been left behind in the car. The Glenfinnan Monument was erected in times past to mark the spot where Bonnie Prince Charlie had landed in about 1744, after coming over from France to pursue the restoration of the Stuarts to the Scottish and English crowns. The esteemed National Trust charge 4 pound to climb the tower, so Allthego didn’t. Others did, seems to be a good view from the top, where the Bonnie Prince stares north.

Jacobite train on the viaduct,

Earlier in the day Allthego had ascended Anoarch Mor in the gondola to try and get a view of the north face of Ben Nevis. Homealone did not venture up. It was pretty foggy up top when first alighting from the gondola car, not much to be seen. Fortunately, the air cleared a little and there was a good view down the valley to the lochs. But Ben Nevis was shrouded in the dreaded Scottish mist, so Allthego didn’t venture on the 40 minute return walk to the north face and returned down the mountain to the waiting Homealone, who had enjoyed a cup of tea. 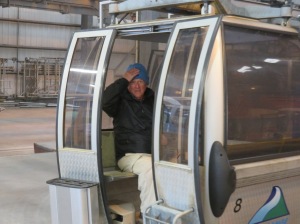 Allthego all alone in the gondola, a bit chilly.

Back at the Imperial Hotel we packed and rearranged a few things for the next stage of the journey; a road trip north to Skye and then onto the island of Lewis & Harris, before heading to the Orkneys and the Shetland Islands in the far north. The first stage to Skye covered some familiar ground, the journey took us up to Invergarry, along the shores of the Caledonian Canal and in particular Loch Lochy. On the way we passed by the Commando Monument which commemorates the role the region played in the training of British commando forces in WW11. Quite an impressive statue gazing out over the mountains. The weather was a bit crook, chilly and windy with rainy squalls. After passing through Invergarry, where we had had dinner whilst on the canal trip, the road out to Skye just rolled along beside the hills and lochs. It is marketed as a great drive, but the scenery was a little disappointing. There had been a lot of pine forest logging going on in recent times and the hills were significantly denuded in many places. A big replanting job will be required to cover the scars.

Glenshiel, now a peaceful valley along the way to Skye.

In a peaceful valley along the road there is a monument to the Glenshiel battle of June 1719. 300 years ago the Jacobites were defeated here by Government forces. There had been a memorial service a couple of days earlier, many tributes were scattered around the memorial stone. Memories are long in these parts! We also stopped in at the famous Eilean Donan Castle for a photo. It has featured in a number of TV shows and movies. On the maps the area is called the Kyle of Lochalsh.  Allthego wondered what this meant. Seems to be that it is here that 3 sea lochs converge, Loch Alsh being one of them and the ‘kyle’ being the ‘straight narrow’ part of the loch. 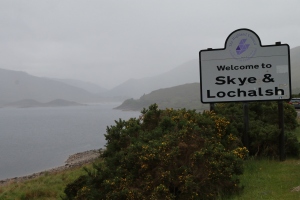 The Scottish mist on the way to Skye.

A little later we caught sight of the bridge across the Loch to Skye. No longer a ferry trip and thus some of the locals think it’s no longer an island! We will just have to see!