We arrived in Corfu to a cloudy day with a few flashes of sunshine, but an ever present threat of rain a little later in the day.

The day before we were in Kotor, the port for the small country of Montenegro. It only has 600,000 people in a very mountainous landscape. Kotor is at the end of a flooded old river valley nestled at the bottom of some precipitous mountains and surrounded by an old city wall. The wall is partly in ruin, particularly the sections that run high up along the ridge lines behind the town. There is a steady stream of people walking along the functional sections. We didn’t have the time in port to do the walls here. Instead, we were in a bus going up to the top of the highest peak overlooking the town. An amazing journey up a narrow road with numerous hair pin bends, in many places virtually one way. In one section oncoming cars had to back up so that we could pass. Homealone enjoyed the experience immensely! Great views looking down to the ship below, almost antlike. Near the top we stopped for a mid morning snack. We are beginning to easily pick what these snacks are going to be ….. prosciutto, sheep/goats cheese and bread washed down with local wine. We were not disappointed.

This is the peak to the top of which we went. 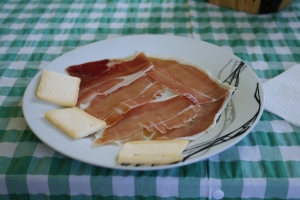 Another snack, a shared plate

Looking down on Kotor, we drove up here.

The other highlight here was visiting the royal palace of King Nikola 1. He was Montenegro’s one and only King and lost the crown after WW1, when Montenegro was absorbed into Serbia. He was fairly astute and succeeded in marrying off a number of his 9 or so daughters (he had 3 sons as well) to various sons of European royalty. The most important being the last king of Italy. The rather modest looking palace was full of Nikola memorabilia, family portraits, uniforms, guns and swords. There was a painting of him in almost every room, the guide said this was to indicate who was the boss. 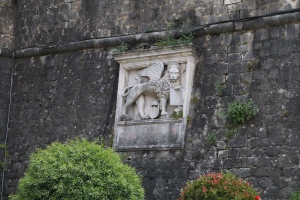 The lion is the symbol of the Venetians. There is always a book in the lions paw; open is peace, closed is war. 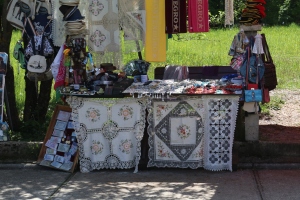 Street stall outside the palace

We descended back to Kotor by a different route in time for a short walk around the old town before having to board the Viking Star for the cruise  back down the fiord like channel to the open sea and then onwards to Corfu. Corfu is a Greek island lying at the ‘cross roads’ between the Adriatic sea to the north and the Ionian sea to the south. Kotor was our last stop along the Adriatic coastline.

Along the channel into Kotor.

Corfu has a very colourful background and was and still is for that matter a bit of a hot spot for the well to do from Europe. The Romans were here, the Venetians came and went, Ottomans, Napoleon and then the British before the Greeks ‘reclaimed’ the place. Prince Phillip was born here in the 1920s. We had a pleasant wander around the Old Town with a stop off to have tea, coffee and some very moist and nutty baklava at a local café. Corfu though is looking a little tired, lots of ‘tourist’ shops flogging masses of ‘local produce and artifacts’, as well as cafes and fast food windows with arrays of Greek pastries to munch on.

Café, a bit empty, ours had a few in it enjoying baklava and coffee.

The Greeks call Corfu ‘Kerkyra’. But, it has a very English tradition. It is the only place in Greece were cricket is played. As one of a our fellow travellers said “Ah, that shows they are civilised”! The one and only field lies in the parkland between the Old Town and the waterfront. The pitch is concrete with a rather well worn mat surface. At either end are fearful torn patches on a good length! The outfield needs some serious attention. Nevertheless, an annual tournament takes place, with international players including Australians taking part.

In the terminal one could get to Albania by going through this door, a bit Alice in Wonderlandish!

We headed back to the ship for a rather late lunch as some scattered showers hit town. After lunch there was  a performance for us by some local Greek folk dancers. They put on a good show, particularly the ‘guitarist’. He really gave the strings a work out. Before dinner there was a ‘chocolate night’. A vast array of nibbles are first put on display and then its open slather, there was a bit of a crush to get at the feast. Yours truly and Homealone just took pictures of our American fellow passengers getting into it! 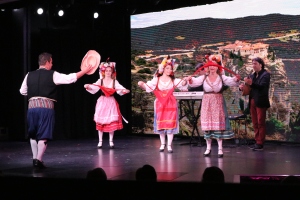 It was chocolate night onboard

This guy could play, what ever the instrument is called, this fast and furious.

Next stop is to be Katakolon. There are a lot of stops on this cruise starting with a ‘K’. Katakolon is the gateway to the legendary city of Olympia, the classical birthplace of the Olympic Games.