← Koper in Slovenia not Copa in Cabana
Dubrovnik →

No this isn’t the name of one of the Dothraki in the Game of Thrones, but the major port of Croatia. We arrived here overnight from Koper. It is was not the greatest of days weather wise. Overcast, windy and cold. We headed off on a drive down the coast to the Vrana Lake Nature Park. This is the largest lake in Croatia and home to many bird species, we hoped to see some. The lake is unusual in that it is not very deep (about 4 metres), the top of the water is above sea level and the bottom is below sea level. There is a small man made channel between the sea and the lake, built in the late 1800s (?) to drain the wet lands behind the lake for agriculture, wouldn’t be done today.  When the water level in the lake drops sea water enters through the channel, the environment is continually subject to the ebbs and flows of sea water. It was spitting rain when we were at the lake to see the birds. The birds also recognised it was spitting rain and very windy so they went into hiding and we didn’t see many birds. Just a couple of hardy soles hiding in the reeds. A little disappointing but still an interesting spot to visit.

The bird walk at Vrana Lake 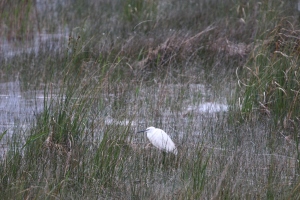 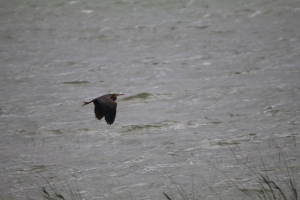 A heron in flight

We got back on the bus fairly quickly and travelled to Kamenjak, on a ridge line over looking the lake, for a snack of traditional Croatian fare. Now after our visit to the market at the Koper stop in Slovakia, we thought this was going to be different. And it was. A plate of prosciutto, fresh semi hard cheese (probably goat or sheep) and some bread. It was quite tasty. We do like prosciutto… 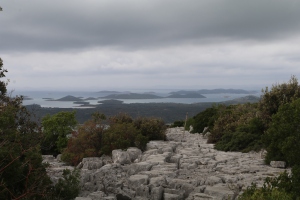 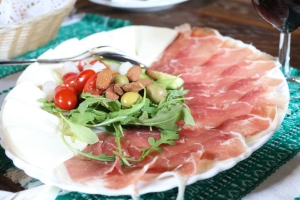 Kamenjak sits on top of a karst limestone landscape; underground drainage lines, sink holes and caves abound. It is quite rocky and rugged. There is a little chapel up here and inside it is a roped off area protecting one from falling down a slot in the ground surface, it drops down a long way. Bones have been found in the bottom of the hole, in past times of unrest bodies had been thrown down the hole. The chapel was built over them to honour the lives lost. It was a sobering experience looking down the hole. 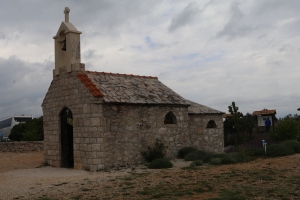 The hole inside the chapel

Later we made our way back to Zada for a wander in the old town, more cobbled streets and old churches, before departing for Dubrovnik. Near where our ship was tied up there is a large circular solar panel array depicting the sun and the planets stretching away in scale along the waterfront. At night it throws light along the shore line and is apparently quite spectacular to see. Also here there are acoustic tubes embedded under the large marble steps that ‘sing’ with the lashing waves and wind bursts along the waterfront. 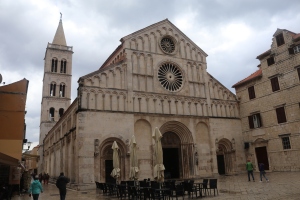 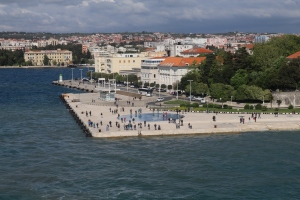 The ‘sun’ on the waterfront, Mercury is the small circle along towards the right edge

Zadar as we leave the port.

As we head off the sun and blue sky appear and we are told it will be a fine sunny day in Kings Landing, I mean Dubrovnik!

← Koper in Slovenia not Copa in Cabana
Dubrovnik →