← On the way to the Tip, of Cape York
Heading south →

Seisia and trip to the Islands

We have now moved south a short distance to Seisia and are set up at Loyalty Beach, this place is a bit like Punsand Bay. It is right on the waters edge, some nice shady campsites, there is an evening restaurant (simple menu items) and a bar set up. It is also the stepping off point for day trips out to Thursday Island and Horn Island. Birds were all over the ground here, going around snapping up seeds and grubs. Our esky is holding up well and doing a good job, one minor problem being that it was acquired from Mitre 10 in Wiepa and they remove the bungs and keep them behind the counter. There was a smallish sign that said something like ‘please ask for the bung at the front counter’. Allthego was so excited at getting this esky that it must have gone from his mind that he needed to get a bung. This explained why the back seat of the truck was so wet, water had leaked out through the drain hole. So ever since Weipa we have been looking out for bungs and making do with duck taping the drain hole. Works ok. But why take the bungs out? Maybe some people lose bungs and go into Mitre 10 and pinch the bungs out of the eskies on display. No Mitre 10 till we get to Cairns. 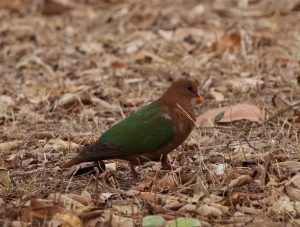 What bird is this? 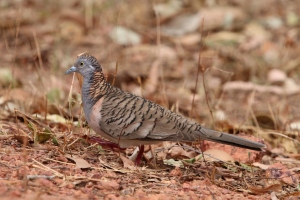 We took the Thursday and Horn Island day trip. You can almost see Thursday Island across the water from Seisia, you certainly see Horn Island and the much larger Prince of Wales Island. TI is about 3 sq km and has 3000 people on it. HI is about 50 sq km and has around 700 people. TI was established in the late 1880s as a replacement for the settlement at Somerset which the Jardines had set up. Somerset had proved to be a failure logistically, enough ships simply did not go there, or past it, and it only had a small harbour area. So TI replaced it as the administrative centre. The Old Telegraph Track, which Allthego has mentioned previously, was the route taken by the Telegraph Line from Cairns to Thursday Island (via an underwater cable). It was completed in 1887, linking Brisbane and TI, and was closed down in 1987, exactly a hundred years later. Today there are ooddles of public servants here, upwards of 20 departments are in operation. Enough said. 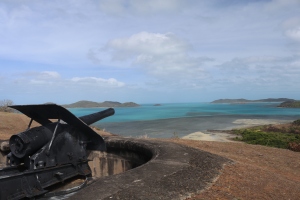 One of the guns on Green Hill

The most northerly pub in Australia 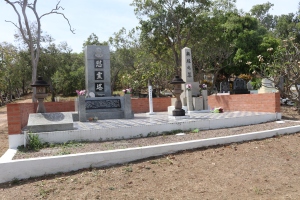 The ferry to TI takes about an hour and covers the relatively short distance in a sweeping ‘S’ shape so as to avoid the reefs in the Strait. It is a journey in its own right! Once on the Island we board a bus, socially distanced seating of course, and head off to see the sights. First stop is on Green Hill overlooking the harbour. It is here that a fort was built in the late 1800s in response to a perceived Russian invasion threat. The restored, but decommissioned, guns point down the channels into the harbour and have a range of 10km. The fort was also manned during both the World Wars. TI was, like Broome on the west coast, a centre for pearl shell harvesting from the mid 1860s. The cemetery has a memorial to the many Japanese divers who died in pursuit of the pearl shell. Also, on TI is Australia’s most northern hotel.

King Kibusu, last of the Torres Strait head hunters and cannibals, converted to Christianity around 1870.

Some local art on Horn Island

Self explanatory, this was a nice picnic area on Horn Island

It was then off across the bay to Horn Island on a ferry to continue the tour there. The local museum was chockers full of WW11 material detailing the role of HI during the war, as well as local cultural pieces. HI was the closest Australian airbase to PNG and was used by the Australian and US air forces as a base for operations. As a consequence it was a target for Japanese air raids, of which I think there were 7 or 8. This made it the second most bombed place after Darwin. Interestingly, TI was never raided because a Japanese princess was buried there! We then toured around a number of the former gunnery installations that are being restored. There is also a team of archeologists undertaking ongoing digs to document and preserve this part of our history.

One of the restored gun placements on Horn Island. 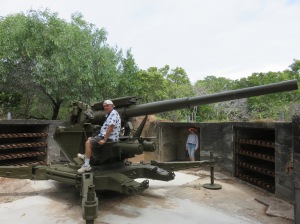 Allthego at the ready, the target would have been safe.

The following day we had a lazy time around camp. Allthego went off for a short drive to see some of the WW11 aircraft wrecks in the bush. There were also numerous remnants around the Bamaga Air strip of WW11 fuel dumps. Old fuel drums rusting away slowly in the scrub. Bamaga was also an air base during WW11.

There were no vanilla slices at Bamaga or Seisia for that matter! 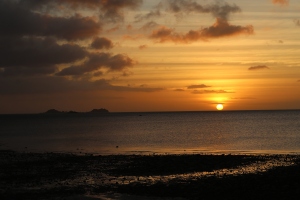 And as the sun sets slowly in the west we are now preparing in earnest for the trek back down the Cape. Bramwell Station the next stop.

← On the way to the Tip, of Cape York
Heading south →