← Out of town
Weipa bound →

Back again after doing about 1800km up and down the Cape

We are now at Coen on our way back down the Cape. We were here 16 days ago on our way up the Cape. The internet is quite good here and allows the downloading of files, hence the ability to resume the blog after 16 days! North of Coen things are a bit problematic internet wise and depend on timing and where one stops. 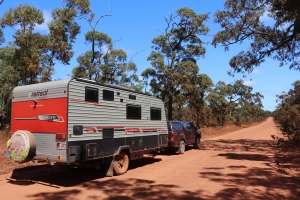 Along Battlecamp Rd to Laura 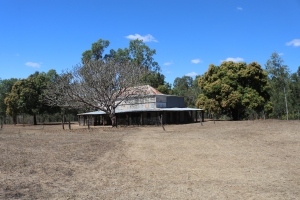 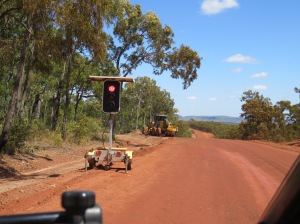 Battlecamp Rd stop sign for roadworks, there wasn’t one at the other end, not even a stop go person!

Remembering back we left Cooktown for the next stop at Laura. We decided to take the Battlecamp Rd from Cooktown to Laura rather than back track south down the Mulligan Highway to Lakeland and then head north to Laura, this is all bitumen. The Battlecamp Rd is all gravel, not too bad though despite some roadworks along the way. Red lights out in the middle of nowhere.  Allthego had done some calculations showing that it was a shorter route, it was by about 4km. 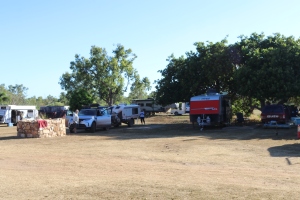 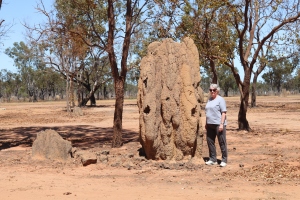 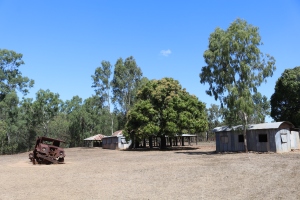 It was  a pretty drive up and over the Battlecamp Range. It was along this road somewhere in the late 1800s that there was an aboriginal massacre. The details of this are all a bit sketchy and there are a number of versions and anecdotal evidence of the extent and responsibility for the massacre. The general claim is that upwards of 150 aboriginal ‘fighters’ made a ‘last stand’ armed only with spears against whites with guns. It is an event that has spiked Allthego’s interest and he is going to look further into the event on return to Brisbane. The road passes by the National Trust’s old Laura Homestead, one of the first cattle properties in the region and then turns a bit south and west to arrive at Laura. We are here for the night before heading for Coen the next day. 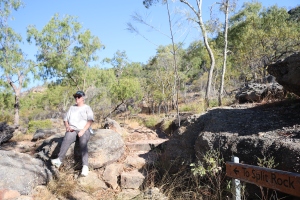 Having a break on the way to the Art Gallery. 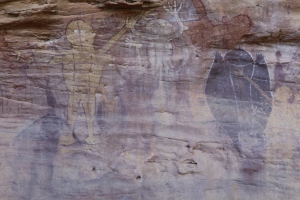 At left is a female figure, in the centre a spiteful spirit figure and at right an echidna. 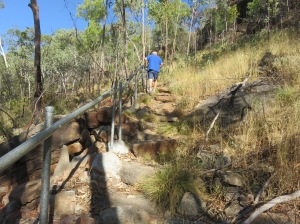 Allthego leading the way to the Art Gallery

Near Laura is an extensive area of Aboriginal ‘Quinkan’ rock art. The interpretation Centre is unfortunately closed due in part to COVID, so we are limited to have a look at the Split Rock art gallery which is about 10km to the south of Laura. This involves a bit of a trek up from the road to rock art sites, a few steps to climb. Quite interesting spot to ponder the work. Quinkans are supernatural spirits that live in the surrounding sandstone and are painted in the rock art. They do their work at night. Timaras or Tall Spirits are the good spirits. They are long limbed and thin bodied providing camouflage among the trees, and allowing them to slip into rock crevices. Imjims are the bad spirits and have long bulbous tipped appendages. They bounce like kangaroos and live like frogs. There are also paintings of animals and human figures on the walls. 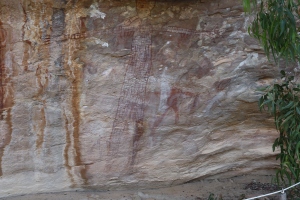 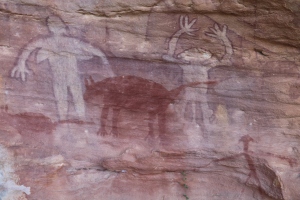 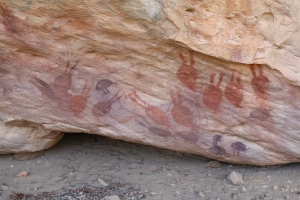 Allthego received some local intelligence in Laura that one should take the bypass road up through the Lakefield National Park  rather than go straight up along the Peninsular Development Rd (the main route north to Weipa). Terrible stretch to Musgrave Roadhouse (corrugations and roadworks a plenty), much prettier and quieter to head through the Lakeland National Park and rejoin the PDR at Musgrave Station and the onto to Coen. It seemed good advice and this time it was. Lakefield NP is very pretty country, towards the end of the dry things were not as green as they would be after the wet and the creek crossings were quite benign. Had a BLT for lunch at Musgrave Roadhouse before pushing onto Coen for the night. We had two nights at Coen. 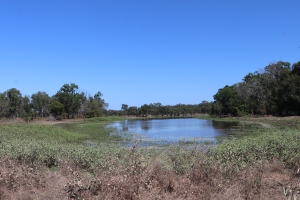 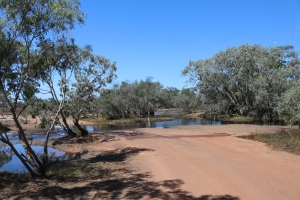 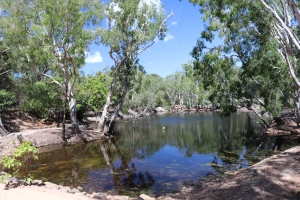 It was here at Coen that we had our first side trip off into the bush in search of Mango Lagoon. This Lagoon is a bush camp site about 60km off into the scrub along roads of varying quality. It was described in our guide Hema Guide book as a must see type location in pristine country. Well, maybe after the wet and things have dried out a bit this might be the case. But it was a long dusty winding road to nowhere and back of course. Some dirt tracks thorough forest. A bit disconcerting though when it dawned on us that we had headed off into the scrub alone. In the event of mishap things could have been interesting to say the least. We saw only one other vehicle in the entire day! Lesson learnt here, not that it really had to be, carelessness more the issue I think. 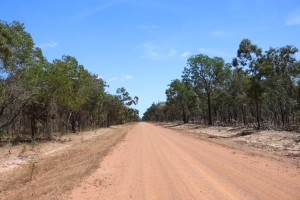 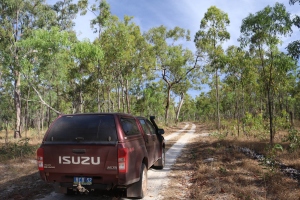 Another road near Mango Lagoon 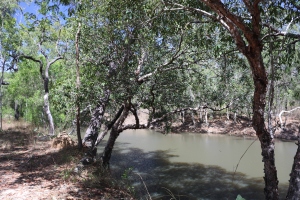 Coen has also marked two minor dramas on our journey. A flat tyre on the Van, easily fixed with assistance from the campground repair team descending on us from out of their vans. One of whom was a retired RACQ road guy. Even repaired the tyre for us. Cost Allthego 3 tins of lager and they almost wouldn’t take those. The tyre gremlin was a bolt straight through the tread. Allthego had noticed this tyre tended to stay a little deflated before we had left Brisbane. The bolt head seems to have ‘sealed’ the hole and the rugged roads since Cooktown (also running on lower tyre pressures) have flexed it letting the air out. No great issue in the end. The other problem was of more consequence. A blown compressor in the fridge, freezer slowly defrosting and things thawing out. 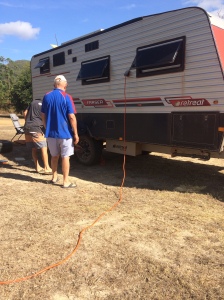 There is a problem 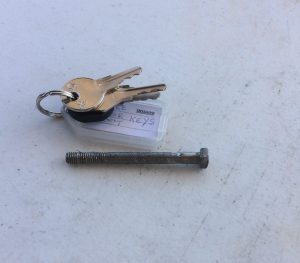 We changed plans and are heading into Weipa to see if we can get it fixed. We had planned to see Weipa on the way back. In a way lucky, if we had been further north there are no ‘fixing options’ and we would have had to backtrack to the Weipa turnoff.

← Out of town
Weipa bound →