← Cooktown
Out of town →

Cooktown and Cook, some magpie geese

One of the consequences of COVID has been the deferral to some other time (or maybe never if some have their way) of many of the events that were scheduled for the 250th anniversary celebrations of Cook’s ‘discovery’ of the east coast of Australia, the western part of which was then known to Europeans as New Holland. But known to the indigenous inhabitants for tens of thousands of years. Allthego remembers and has in his boxes at home many bits and pieces from the 200th anniversary celebrations back in 1970, when he was just a young Allthego. Some big celebrations and visitations of dignitaries had been planned for Cooktown, now deferred. They would have taken place a couple of weeks before we arrived in town. Allthego had hoped to add to that collection of memorabilia for future Brown generations to look through! Haven’t even had a stamp issued!

So we were left with just wandering around looking at the things that remained from the 1970 and earlier festivities. 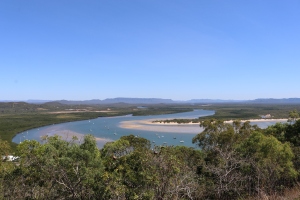 This marks the spot where Cook tied the Endeavour up to a tree. 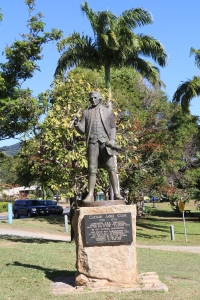 A statue of Cook looking out to sea across the Endeavour River. The spot on the river bank where it is considered the Endeavour had been beached for repairs after running aground on a reef off Cooktown. There is also Reconciliation Rocks where Cook and a shore party engaged in an act of reconciliation with local aborigines after there had been some violent encounters and ‘misunderstandings’. Cook had also climbed Grassy Hill, we drove up,  which overlooks the Endeavour River to the west and to the east looks out over the sea. Cook climbed up here a number of times to try to locate a safe sea way out of the river and through the reef to the north. There was great views from atop the hill. 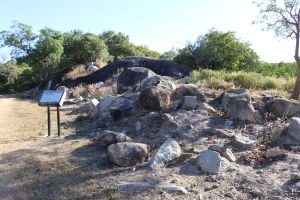 Anchor and cannon from the Endeavour 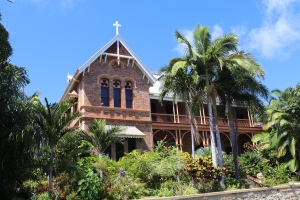 The James Cook Museum was well worth the couple of hours we spent there. It is in the restored Sisters of Mercy Convent School built in 1889. A magnificent old building. There are three big Cook items on display in a temperature controlled display case. Endeavour’s anchor and a cannon that had been salvaged from the reef which the ship had struck. There is also a piece of the tree to which the Endeavour had been lashed when it was beached on the river bank. One wonders whether there are any more pieces of said tree around still. A bit like a holy relic maybe?

Portion of MIlbi Wall of reconciliation 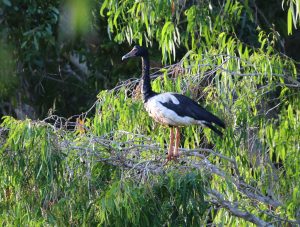 Magpie Goose in a tree

Late one day we visited Keatings Lagoon on the outskirts of town, 600 m walk down beside a dry season shrinking water hole. Along the way we came across a flock of magpie geese paddling around the edge of the lagoon, they became disturbed and took off into the surrounding trees, quite a sight.

We are now planning a day trip out to Elim Beach to visit the coloured sands and cliffs north of the Hopevale Aboriginal community.

← Cooktown
Out of town →