The rural area around Benalla is getting in on the Silo art movement. These old relics of our agricultural past are mostly sitting relatively idle or simply unused beside railway lines around the countryside. Towns trying to capitalise on tourism are having them painted in all sorts of ways. The ones below stretch along the road out of Benalla to Tocumwal on the Murray. 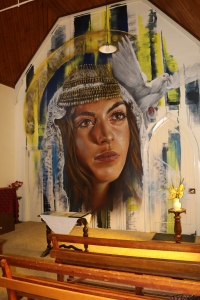 Goorambat a few kilometres out of Benalla has a couple on their silos and the local Uniting Church has had a mural inside the church on its front wall. An imposing representation of the feminine ‘form’ of the Holy Spirit, Sophia. ‘Sophia’ means “wisdom” in Hebrew. Very out there indeed! It attracts quite an audience. 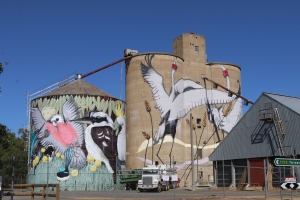 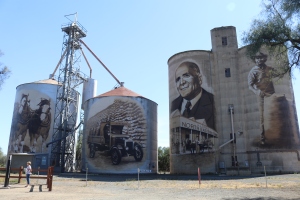 All of the silos have been done over the last 3 years or so. All quite fresh and interesting. We had a hamburger lunch along the way at the old hotel at Devenish. The publican told us a tale about the old closed pub up the road a bit that claimed to have had Ned drink in its cellar on a number of occasions. Subsequently, it was revealed that the pub was not built until 3 or 4 years after his death!

Fish trees at the Winton Wetlands

The water tank in the Wetlands, there is an unfortunate little leak in the tank. There are 3 fire fighters painted around the tank.

We finished off by driving through the Winton Wetlands into Glenrowan on a back road and then out on to the Hume Hwy and down to the caravan park at Benalla. We are now heading to Canberra for the Hayes’ sibling annual Christmas get together. A visit is also on the cards to the National Gallery to see the Nolan sequence of Ned Kelly paintings.