We have reached the halfway point in our journey along the Caledonian Canal and are in Inverness. We now have to turn around and go back! Niel and Jackie are leaving us here in Inverness and heading off to Ireland. But first we are to have a brief wander around the city and see some of its sights, mainly those involving food. We don’t have much time to do anything else, apart from going out of town to visit the Culloden battlefield. Culloden was where in 1745 the last pitched battle took place on British soil. 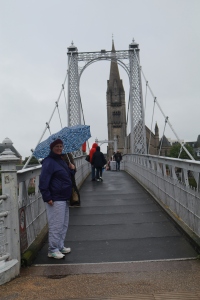 On the swing bridge over the River Ness into city central.

The weather was also improving a little and we had a relatively clear day for the visit to Culloden. Khalid, a very Scottish sounding Pakistani taxi driver, advised us that it was going to rain the next day and that we should do outdoor things today. I asked him how he knew it was going to rain tomorrow. He explained that because it wasn’t raining today it would rain tomorrow. This was helpful. 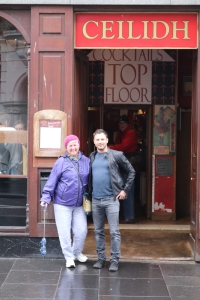 The National Trust is slowly trying to ‘restore’ the battlefield environment at Culloden to what it was in 1745. No easy task given subsequent land uses and the passage of time. A guide took us around the site explaining the various positions taken up by the opposing forces and the basic battle strategy of both sides. 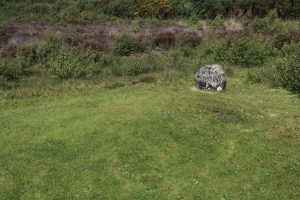 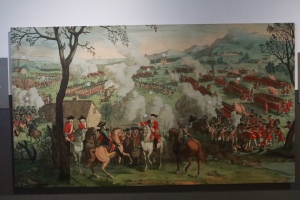 A composite painting of battlefield events

At its simplest interpretation the battle was between Government (English) forces with protestant ideals and the Jacobites (Scottish clans lead by ‘Bonnie’ Prince Charlie ) supporting the restoration of the Stuart dynasty (catholic) to the Scottish and English thrones. The visitors centre explains things in much detail and it was a lot more complicated than that. Scottish clansmen took part on both sides, the French helped the Jacobites. The religious differences were not as clear cut.

The Scottish clansman had a particular battle technique that previously proved successful against the Government forces. The Highland Charge, demonstrated in the photo below. The English traditionally stood in lines of three rows. The Scots would charge them and with their forearm mounted shield smash the first guy aside, slitting his throat with the upraised dagger in his left hand. Next the Scot would slash down at the second row with the claymore (big sword) in his right hand. The guy in the third row generally, ran away or so the Scot hoped! This technique worked well on firm ground, but here at Culloden it’s a bog. Enough said! Anyway, the Jacobites were routed and Bonnie Prince Charlie escaped back to France.

Tony as a Scottish Clansman weaponed up.

In the aftermath of the battle the English slaughtered all the injured and captured Jacobites. They were later buried in various mass clan graves in unmarked pits. Years later clan names were engraved on stones placed near the pits. It is not really known whether the clan names match the pits. It was also a period when laws were introduced in an attempt to supress and wipe out the clan system in Scotland, hoping to prevent future uprisings. The population was heavily suppressed and controlled by English land holders, culminating in the Highland population clearances. Many emigrating to Canada, US and Australia. Please refer to Wikipedia for more on this and any thing else about the Jacobites. There remains in Scotland today this feeling that the English are, well, the English and the Scots are the Scots. Culloden feels a bit like the Civil War battlefields we have seen in the United States. The battles just don’t seem to have been finished!

After all this education it was back to the present, a farewell lunch and then the boat for the trip back down the Caledonian Canal the next day.