Off today to look around Nottinghill and the Portobello Rd markets. Allthego had stumbled over a self guided walk around Nottinghill on the internet and had mapped out the details. After a short tube ride we set off at a brisk pace down Portobello Rd on a partly sunny day. Now Nottinghill over the last twenty years or so has become trendy, like it was back in the mid late 1800s. In between it had become run down, it is no longer cheap and nasty. 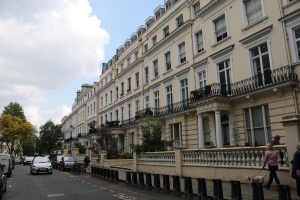 Renovation work is ongoing, plenty of cranes and scaffolding around the streets with repairs and paint jobs on the terraces. Lots of young mums pushing prams around in between cups of tea and scones in the street cafes. It is fairly multicultural too, the market area abounds with all nationalities manning stalls along the road. 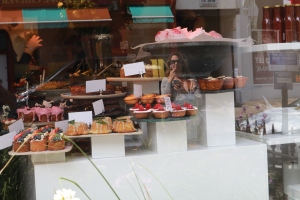 Market stall, the buckets are full of olives

We looked out for the bookshop made famous because of the Hugh Grant Julia Roberts movie ‘Nottinghill’. There is one in Portobello Rd that subtly promotes itself as the bookshop, but it isn’t, just an imposter selling cheap Chinese souvenirs and bric a brac. People stand around here taking selfies and posing for fellow travellers. The actual bookshop is further along off in a side street. Still a bookshop, but not just travel books! The shop façade and interiors are as per the movie and there is a plaque outside authenticating its place in history. Homealone couldn’t resist transacting and acquired a Peter Pan book. Allthego asked the shop attendant whether Hugh was in a cupboard or just out the back. She was non committal, but did smile. Earlier, Homealone had encountered Paddington Bear beside the road. 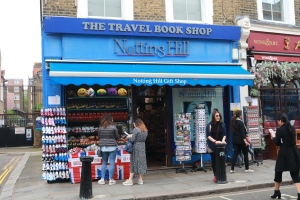 This is not ‘the’ bookshop in the movie 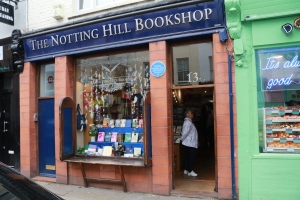 This is ‘the’ bookshop, no longer just a travel bookshop. 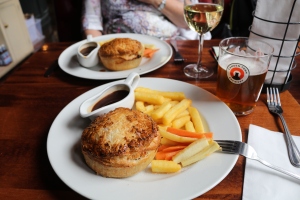 Chicken pies in a pub for lunch

The streets are certainly colourful and the Mews are now smaller residences in behind the street fronts and larger terraces. One of these is claimed to be the most photographed mews because of its colourful and varied appearance. It was also in the movie, which also helps. 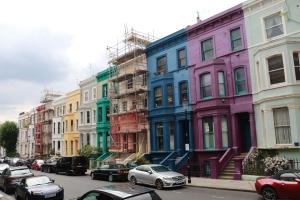 This street appeared in the movie a few times.

Some more meandering found us at the tube station, so we hopped on and soon found ourselves back at Nell Gwynns to enjoy a home cooked omelette for dinner.