Piraeus is the port that services Athens. It is a pretty big port, one of the largest in Europe and serves as a distribution point for inwards trade into central Europe. Because of this it has some strategic importance. In the aftermath of the global financial crisis a few years back the EU put the screws on Greece and made them sell a few things to raise some Euros. They didn’t sell Santorini or Mykonos, they sold 51% of the Port of Piraeus to Chinese interests. Us Aussies were a bit more subtle and only leased the Port of Darwin to the same chaps for 99 years. Enough of this though. The Viking Star is in Piraeus for an overnight port stop before we are to disembark the following day.

Many onboard are off into central Athens for tours around the main sites of the city. Some years ago we were in Athens for a few days and had seen the famous landmarks of the Parthenon, the museums etc and this time decided to head off to the south and the Pelopennese. This involves crossing the Corinth Canal and travelling down the eastern coastline. Olympia which we had visited a few days before is on then western side of this knob on the bottom of Greece. 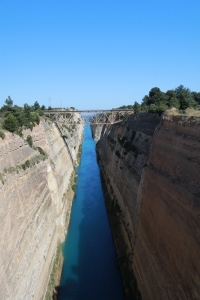 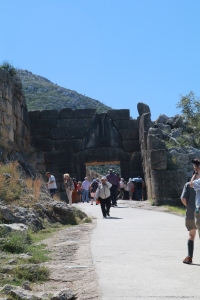 The lion relief above the gate. Their heads are gone!

Ramp into the palace

Like on the road to Olympia we passed by acres and acres of olive trees and grapes. Our objective was the ruins of Mycenae. Now this place has a special role in the legends (or are they true, embellished facts perhaps) of Greece. It is the home town of Agamemnon, the King of Mycenae when the Trojan wars were thought to have occurred in the late 12th century BC or thereabouts. If you would like a retelling of this Homer tale from the Iliad the best place to go is to that movie from a few years back with Brad Pitt as Achilles, Peter O’Toole as Priam and Eric Bana as Hector. The book is a bit hard going! It was an interesting place, not a lot remains of the old city but there are certainly some great views from its walls over the surrounding landscape. The arch above the Lion Gate into the palace is adorned with a relief of two lions. It is thought to be the oldest monumental relief in Europe dating back to around 1240 BC. The ramp behind the gate is the actual surface from around the same time period. Walking on stones that have been there for 3500 years! 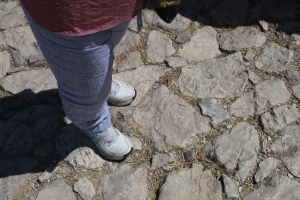 After some time in the ruins and also at the nearby beehive shaped Tomb of Agamemnon we headed back to the ship and our final night aboard.

Entrance to the Tomb of Agamemnon 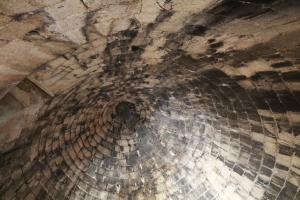 The bee hive structure inside under the hill, showing the interlocking layers of domed stone blocks. 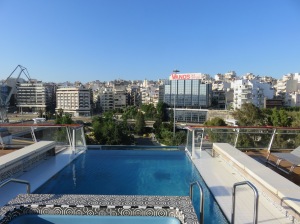 Viking Star’s infinity pool, looking out over Piraeus. It had been tempting to get in, but our trip had been a little chilly!

As with all Allthego’s blogs we are a few days behind the live action. We are now in London and have been holed up in our self catering accommodation at Nell Gwynn House in Chelsea. Modest comfortable digs but the circuit breaker trips if the toaster and kettle are on at the same time. A bit of care is required dear readers!

Now in London and having finished the  first leg of the Grand Tour, Allthego is reminded of the words of the Austrian Empress Elisabeth who said some time in the late 1800s; “The destinations are only desirable because of the journey between them….”.

A bit of culture to conclude with!