We have been here at Daintree Village for three days overlooking the River in a very pleasant camping ground. An unpowered site so we have had to be a little frugal with power and water. Where we are located was underwater in the last big flood, the water some 8 metres above normal. The weather continues to be a bit unsettled, humid, cloudy mornings with sun appearing late morning to shine on the solar panels and get the batteries charged up. Lots of people coming and going in all styles of transport, beaten up combi wagons and trucks through to a 5th wheeler set up. Mostly Queenslanders, a few NSW and the odd Victorian number plate. 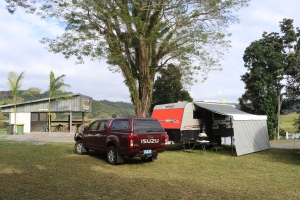 Campsite beside the Daintree River 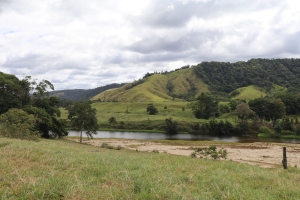 View from under our awning

Countryside very green, surrounded by lush rainforest. Paddocks full of Brahman cattle, lots of newborns all surrounded by flocks of white birds, scavenging for insects and other stuff that the cattle dig up whilst browsing around the grass. 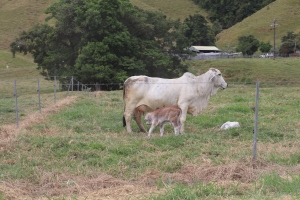 A common sight on the Daintree flood plain. 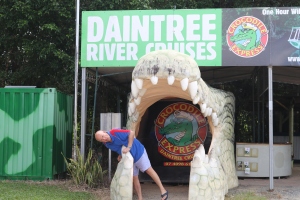 Have taken the almost compulsory hour long croc spotting river cruise. The river really shallows out not far upstream from the campground and so our croc tour boat heads back downstream. We have seen 4 or 5 crocodiles from the boat, one rather large female sunning herself on a sandbank and a big four and half metre male just ‘floating’ with it’s head and back just out of the water. 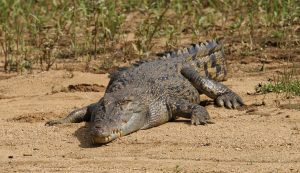 This is a 3 metre lady crocodile sun bathing

He is the so called dominant male in this section of the river. We have seen crocodiles before but they do have a certain captivating aura, very cold and menacing! Some river birds were also out looking around for food.

A snake neck cormorant (I think) 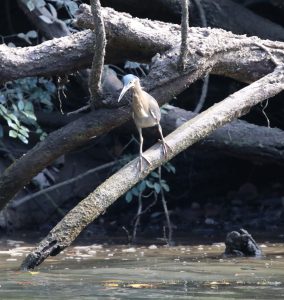 Some sort of water bird

Coming up from Port Douglas we again passed through Mossman. The Bakery was open, and, they had a vanilla slice! It was a traditional style but the filling was a little bland and the icing sweet, held together well and didn’t ooze out the sides too much. Still a little disappointing. Hope to get another one when we are in Cooktown in a few days time. 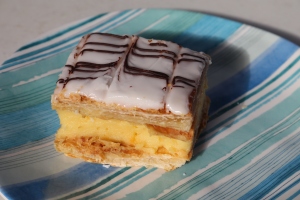 We leave Daintree Village tomorrow and cross over the river and head for Cape Tribulation and the Bloomfield Track for a few days before returning here and heading to Cooktown on the inland road.